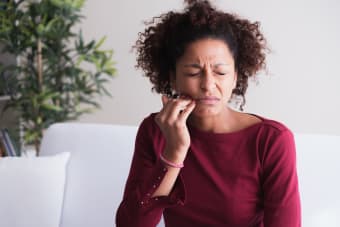 Symptoms, Causes, and Treatment of Gum Disease and Receding Gums

Do your gums hurt? Are they swollen, bleeding, or receding? Any of these symptoms could be a sign of gum disease. With the right dental care and daily oral hygiene routine, you can reverse this severe condition.

What is gum disease?

What is gum disease?

According to the Centers for Disease Control and Prevention (CDC), gum disease is the result of infections and inflammation of the gums and bone around the teeth.

The first stage of gum disease is called gingivitis—a relatively mild condition that can usually be treated with an excellent oral hygiene routine.

However, gingivitis is not to be taken lightly.

Untreated gingivitis becomes periodontitis—a severe form of gum disease. With periodontitis, the gums pull away from teeth, bone can be lost, and teeth may loosen or fall out.

In fact, periodontitis is the primary cause of tooth loss among adults. It’s a shockingly common problem:

The CDC estimates that 47.2% of adults aged 30 or older have periodontal disease. That number increases to 70.1% for seniors.

Unfortunately, it gets even worse:

Harvard Medical School reports that people with periodontal disease are three times more likely to have a heart attack, stroke, or other serious cardiovascular events.

Bits of bacteria, food, acid and saliva combine into plaque that clings to your teeth. The bacteria in plaque release acids that attack your gums and tooth surfaces.

To make matters worse, if the plaque is not removed, it will harden into tartar. Tartar significantly increases your chances of developing gum disease.

According to Health Canada, the tartar’s rough surface irritates gum tissue and collects even more plaque.

Tartar is also tricky to remove. The only reliable way to do it is through professional teeth cleaning. That’s why it’s essential to get a dental check-up every 6 months!

While plaque and tartar are the primary cause of gum disease, other factors may contribute to developing the condition, such as:\

The biggest risk factor is smoking. A study in Periodontology 2000 found that cigarette smokers are 2.7 times more likely than non-smokers to have moderate to advanced periodontal disease.

Your gums attach to the teeth lower than you can see. Here, there is a small space where food and plaque can quickly become trapped.

As a result, plaque forms excessively along the gumlines, releasing harmful acid. Excessive tartar deposits will rub against your gums, irritating them. Either or both of these conditions may infect your gums.

If you have a history of gum infections, it is crucial to solve this problem. The Washington Post reports that chronic gum infection is associated with an increased risk for heart attack.

In addition to adopting a great oral hygiene routine, you should avoid smoking. According to Healthline, smoking makes it harder to fight off gum infections and for your gums to heal afterwards.

Have you noticed that your teeth are longer than they were before?

You may have receding gums—when the gums pull back from your teeth and expose the root, potentially causing sensitivity.

The Canadian Dental Association (CDA) notes that receding gums are a common condition in adults over the age of 40. Often times, it is the result of wear and tear or aggressive tooth brushing.

If plaque builds-up for a long enough time on your gums, it damages them and pulls them from your teeth.

In any case, receding gums may increase your risk of decay, infection, and tooth loss.

Depending on the severity of your gum recession, a gum graft may be necessary to cover a portion of the exposed root and revive the tissue. However, in more developed cases, a gum graft may not be possible.

Therefore, the earlier you bring any gum recession to our attention, the better we are able to treat it.

The Institute for Quality and Efficiency in Health Care points to bleeding gums as a telltale sign of gingivitis. It typically will occur while brushing, flossing, or eating hard food.

According to the U.S. National Library Medicine, buildups of plaque along the gum line are usually to blame. As a result, this condition underscores the need for effective oral hygiene and professional teeth cleanings.

Notice your gums are puffy or swollen?

Through harmful acids and abrasion, excessive deposits of plaque and tartar may swell your gums. The point of attachment between your teeth and gums is especially at risk.

With gum disease, swollen gums may also increase the severity of your symptoms.

The problem is that the swelling opens up pockets between the gums and teeth that are perfect for bacteria to grow. Here, bacteria have a chance to decay the roots of your teeth.

If you notice you have swollen gums, you should book a dental appointment.

Are your gums tender to the touch?

Experience discomfort in your gums when you eat or drink?

Mild or severe gum pain can be a sign of gum disease. Other times, gum pain is a sign of hormonal changes, tobacco use, or improper oral hygiene.

If you see that your gums are also red, swollen, or bleeding, you should book an appointment with us immediately.

Have you noticed that your gums are abnormally enlarged or bulging?

You could have inflamed gums—both a cause and symptom of gum disease.

If you have excessive plaque and tartar in your teeth, your body will respond with gum inflammation.

As a result, you can potentially reverse this condition by brushing and flossing to remove plaque. However, a professional dental cleaning may be necessary to remove any tartar.

Do you have questions about gum disease or receding gums?

We can get rid of your gum disease by removing excessive deposits of plaque and tartar and setting you up with a great oral hygiene routine. If your gums are infected, receding, bleeding, swollen, sore, or inflamed, don’t wait for the condition to develop into a more severe form of gum disease. Book a free consultation with us.

Are you searching for a dentist in Edmonton? We are always accepting new patients to our dental clinic! Contact us to get started today.